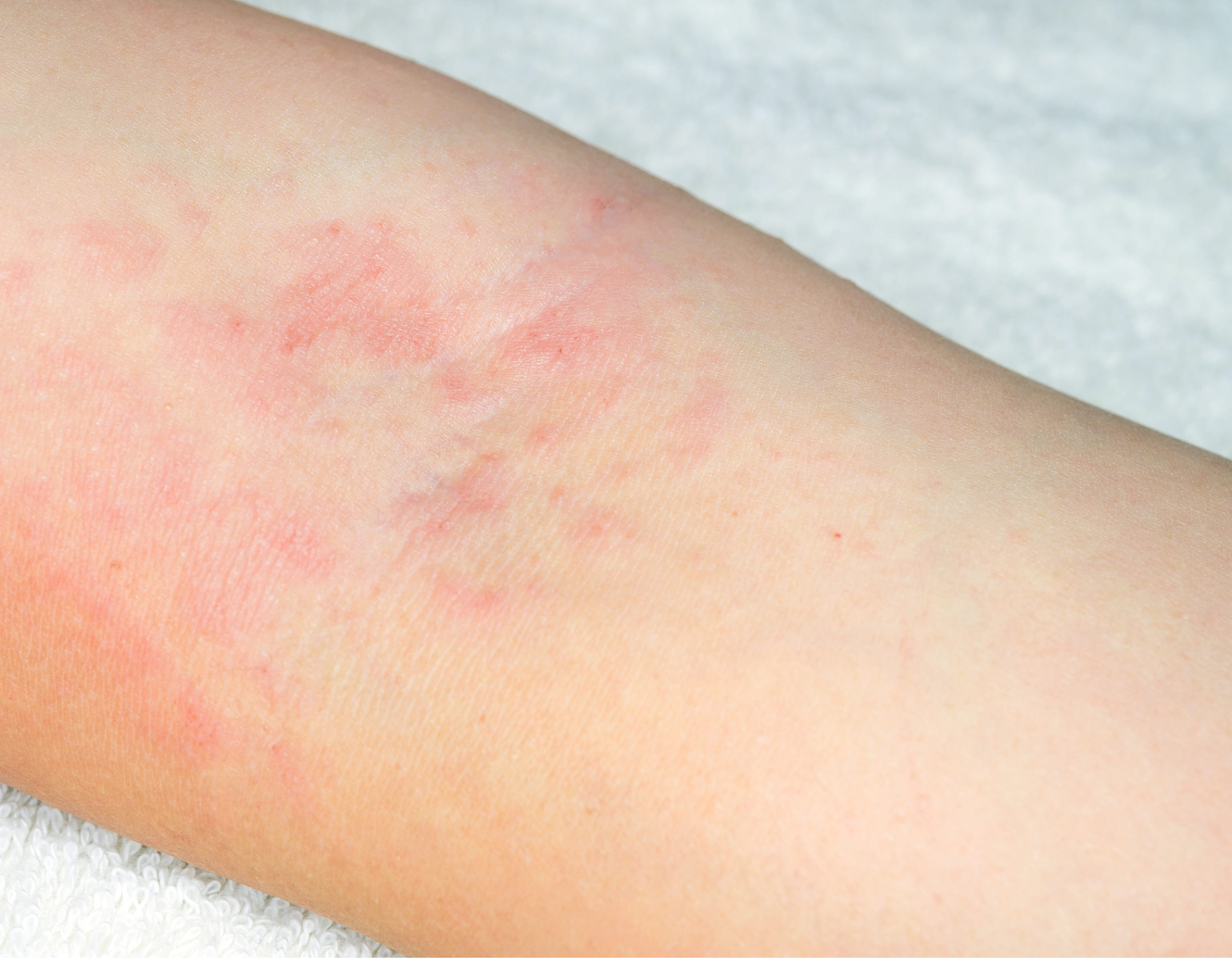 Rashes come in many forms, but can typically be identified as unusual changes in skin color and texture. A rash can be localized or affect the whole body.

Rashes come in many forms, but can typically be identified as unusual changes in skin color and texture. A rash can be localized to a specific region of the body, or affect the entire body. It’s proliferation and intensity is highly dependent on the cause. At our clinic, we have spent a lot of time researching the possible causes of rashes and their respective treatments. The information below outlines the types of rashes one can get as well as their causes and cures.

Infections often cause rashes and will commonly appear localized to exposed areas such as the face, hands, and torso. Rashes caused by infections are not itchy but they are often painful. The most common infection is impetigo, often seen on children’s faces, but it can affect anyone. This rash is often crusted and weepy and spreads over multiple days. Staph aureus is the most common type of impetigo. Lastly, scaly annular or circular eruptions that appear on the hands, groin, and feet are often caused by fungal skin infections. This infection frequently involves the web spaces in between the toes, and a discoloration of the toenails.

Acute dermatitis is an itchy inflammation of the skin that can appear suddenly and last for multiple days or weeks. Chronic rashes that are visible for longer than 6 months fall into a different category. These different eruptions are chronicled under their respective headings.

Eczematous dermatitis rashes look very similar to atopic dermatitis. They are usually red and swollen, often itchy, and may blister at times. The most common type is irritant contact dermatitis, which often appears on areas of the body that are exposed to the elements, soaps, detergents, and sometimes solvents. These rashes are commonly seen on the hands, but can appear anywhere on the body.

Allergic contact dermatitis to poison oak is the most common in the Western United States. This type of dermatitis appears red, swollen, and can be very itchy. It frequently appears in a linear distribution, suggesting a casual contact by body movement. This kind of dermatitis can also blister.

In some cases, individuals may experience red papular or bumpy dermatitis that appears on the trunk and extremities as a result of a reaction to the drugs. This is more common in adult patients who are on multiple medications. Ace-inhibitors such as Lisinopril are the most common in our practice.* Children and adults with antibiotic reactions (especially from penicillins and sulfas) may appear in a similar way. We recommend withdrawal of any offending agents, and the use of moisturizers and topical steroids.*

There are acute conditions that appear similar to psoriasis–a red, scaly rash. Pityriasis rosea is the most frequent form of this rash. It appears as an annular patch that looks very much like ringworm. It is often referred to as a herald patch. As time passes, more rashes can appear on the trunk and extremities that have not been exposed to the sun areas. This condition can last 6-12 weeks, after which it will spontaneously resolve. This condition is virally mediated, given the time frame and absence of future recurrences.

When treating rashes it is best to avoid harsh cleansers, toners or astringents. We recommend a non-soap cleanser, such as Dove or Cetaphil, and consistent use of moisturizing lotions and creams.* The best products will contain ceramides.* We suggest Cerave cream and Cetaphil Restoraderm lotion. In more extreme cases, creams and topical steroid ointments are useful.*

We recommend withdrawal of any offending agents, and the use of moisturizers and topical steroids.*

While mild forms can be treated with topical agents such as mupirocin, most infections are easily treated with oral antibiotics that target staph aureus. For patients who have recently used a hot tub, a red, pus-filled eruption that often takes the form of pimples on the trunk can be seen. This is commonly referred to as hot tub dermatitis and results from pseudomonas aeruginosa. The best treatment is to gently cleanse the skin, and possibly an oral antibiotic.*

If you come into contact with poison oak resin, take a hot shower with soap to adequately wash it off your body.* Your clothes should also be washed in hot water with detergent to prevent further exposure.* Antihistamines with potent topical steroids, and potentially a 2-3 week course of prednisone, are an effective treatment plan.*

We recommend moisturizers, non-soap cleansers, and occasionally topical steroids prove to be helpful.* Outdoor sunlight therapy is often the most helpful therapeutic agent, but be careful not to burn the skin.* A sunburn can induce a remission.*

The best treatments are antifungal agents that should be applied after a skin scraping that demonstrates the existence of fungal elements.*

In Case of Abscess From a Rash

A nodular, often painful process that occurs in areas of infections is typically referred to as an abscess. They can appear anywhere on the body, but are most often visible on the trunk. To clear these lesions, oral antibiotics and surgical drainage are often necessary.*

Request an Appointment in Sacramento, CA

Dr. Tanghetti’s work has been published in journals such as Lasers in Surgery and Medicine, Journal of Dermatologic Surgery, the Journal of Cosmetic and Laser Therapy, and Cutis. He is a fellow of the American Society for Laser Medicine and Surgery, and a member of the California Medical Association, the American Medical Association, and the American Academy of Dermatology. For a consultation to discuss the rash treatments offered at our clinic, call us at [916] 454.5922 or complete the form below.

* Individual results may vary; not a guarantee.
Connect with Us:
Share:
We're happy to answer any questions you may have, feel free to call us at
[916] 454.5922